At some point over the last two days we passed the point of no return and now find ourselves in Waiau. What’s in Waiau one may ask? Not sure because it was dark when we got here but thankfully there’s free wifi and a camper park. The last two days has seen us nearly cross the width of the island, leaving the home of Monteith Brewery and seeing … wait for it…. more snow-capped peaks. A change blew through yesterday, literally, preceding a fresh dusting of snow on the alps recreating a fairytale scenario worthy of Snow White.

The Punakaiki pancakes with accompanying blowholes were well worth the stop despite the Roaring 40s living up to their name. The coastal route, reminiscent of the Great Ocean Road, had million dollar views around every bend.

If there was ever a place named aptly it is Cape Foulwind. The Viking seafarers could learn a thing or two from the person who named this place: Greenland? Really? What the attraction is for sea lions here it’s not clear but they seemed quite relaxed at Foulwind. Even though a walk to the lighthouse beckoned, the wind was proving too disagreeable so it was back to the van and motor the last few kms to Westport. The washing had stacked up so we required laundry facilities and a sheltered camping spot.

Overnight, the rain poured generously as we contemplated the next part of our journey. In the end we decided that time didn’t permit following the coast further north regardless of the visual delights that would surely be there. It was going to be a swim in the Hanmer Springs via a snowy alpine traverse at Lewis Crossing. Spectacular Buller Gorge and heritage Reeftown were highlights along the way.

As always discussion turned to where we wanted to spend the nigh. A dart at the map would have been a more likely means of deciding but in the end we find ourselves in Waiau, home of the Fundraising Pig Hunt in late October. The local pool needs repairs after the earthquake earlier this decade, so if you love to hunt pigs, we can recommend a place to stay. 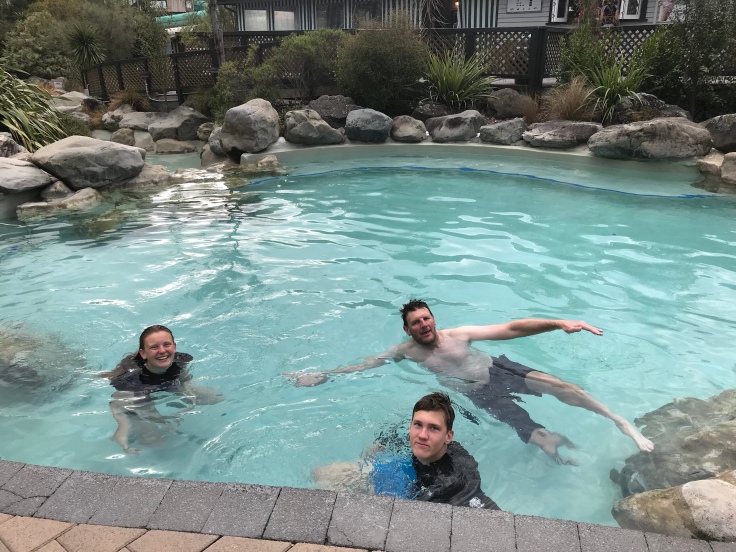